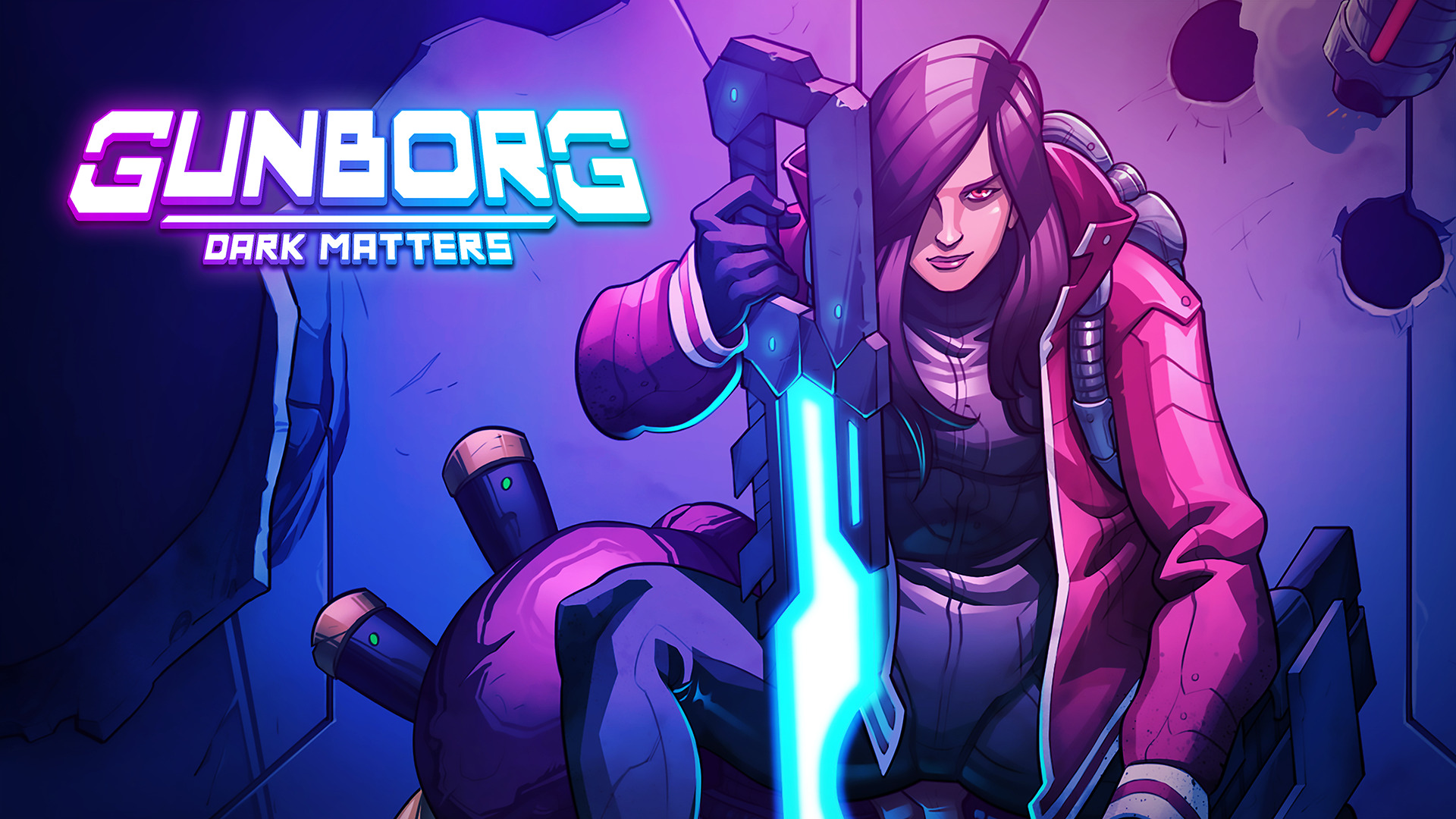 Hello friends. This is the review of Gunborg: Dark Matters, a brutal arcade-style action platformer that reminds us of old-school 8-bit shoot’em up video games! Rickard Paulsson’s first indie game started in 2013 as a side project and had a demo published last year that ticked our interest. Earlier iterations of the game and proof-of-concept screenshots can be seen in the credits, a nice trip through all the phases the game went through to reach this level of polish after 8 years of development.

You’re an edgy female protagonist that takes on an army of alien soldiers and killer robots while making your way in and out of a giant spaceship on your way home. Starting with your trusty blade and a shield, you’ll need to fight through the game’s levels by jumping, shooting, and defending against the enemies. Killing enemies will make them drop their weapons so you can pick them up and use them against other enemies, but be wary of the scarce ammo, as there’s no spare ammo to pick up – once you’re out you need to get another (hopefully loaded) weapon.

But bear in mind that most enemies can be dealt with your powerful shield from afar or in a close range if you bump them with it, as its main function (and the game’s unique mechanic) is to protect you from enemy fire as well as bounce that fire back to them – so you need to consider your angle while blocking, something that if you get used to, you’ll be able to pull off some wicked shots! To wield your shield, you need to right-click, and then using the mouse you can move it 360 degrees around you, but keep in mind that the aforementioned shield can be worn down if many attacks land and bounce off it. Despite the undoubted usefulness of the shield, there’s also a large variety of weapons that are powerful enough to decimate the enemies too.

Another mechanic that affects your gameplay is the build-up of “Dark Energy”. While blocking, shooting, and killing enemies fast your multiplier is adding up. After reaching your multiplier to “3” you’ll be infused in Dark Energy that supercharges your weapons, allowing for some powerful attacks and changing how some weapons work.

The game’s 15 levels are well designed, with some very challenging sections to pass, as in any true to its roots skill-based platforming game! You need to time your jumps right, and use your shield to defend against spikes and other environmental hazards as you move around the ship’s narrow corridors. All while getting shot at most of the time, or getting chased by lasers! Insane!

Enemies are unforgiving, and considering the small health pool, you’ll need to ooze out every bit of skill you’re having to make progress through the game. Luckily you’re can choose between 3 difficulty settings to ease your playthrough between “Easy”, “Normal” and “Hardcore”, and the respawn cycle is quite fast and addictive. You NEED to get ONE.MORE.TRY! The hardcore difficulty is not available right from the start but can be unlocked when you gather 10 “Info-bots” which is a nice “side objective” during the levels and often require extra steps to collect.

Bosses on the other hand, while well-designed are often easier than some parts of the levels – once you get to know their attack patterns, they’ll be easy to confront which is rather the opposite of what you’d expect. Perhaps some tinkering would be welcome there to add more randomness to their attacks.

If you’re lucky or skillful enough to reach the end of each level, you’ll be shown a score screen that sums up points for gathering up Info-bots, a time bonus, a health bonus, and a challenge bonus that adds a percentage depending on your selected difficulty level. Adding all those points gives you a “rank” to check how good you did on that particular level between “F” and “A” and if you have done particularly good, an “S” grade. So here’s a way for the player to aim for new records and generally adds replayability to your game, and maybe in the future, the developer can implement a global score list for players to measure up against.

The stylish graphics are crisp and detailed while the animation is very fluid, something very important while moving around frantically and avoiding death – understandably as the game’s developer is an animator! Another thing that we liked is while the levels, characters, and the world are detailed, the game does not require a monster-specs computer to play with. Everything was nice and smooth even playing on our aged 850M laptop without any performance problems or frame-drops. The soundtrack is a very catchy, slick 80’s synthwave electro-styled one, that is pleasant to the ears and really fitting to the overall setting of the game. The soundtrack was composed by Cato Hoeben, and can be heard on Spotify. Right up to par with THE (in our opinion) best soundtrack of Ghostrunner.

The game offers full gamepad support, but we’ve felt that the keyboard/mouse combo was better for tackling the game’s challenges. Controls, are very responsive and uses typical keybinds:

While the level of polish is astounding, there are always things that could be added. A resolution slider would be welcome, as is the option to play in Windowed mode, but since the developer is really communicative and easy to reach he’ll be delighted to add any requested features and options if you ask nicely! Another welcome addition would be a save “reset” or additional “saves” so that more than one player has a go on those level records!

Gunborg: Dark Matters is a surprisingly addictive take on the 2D-Platformer genre! It is relatively easy to pick up and play when you have some free time, there’s no grinding or leveling up to “pad” the gameplay resulting in a fat-free non-stop brutal shooting, and killing, and retrying after you’re dead that you’re guaranteed it will consume any and all of your free time trying to see whats next in your journey back home! Totally recommended!