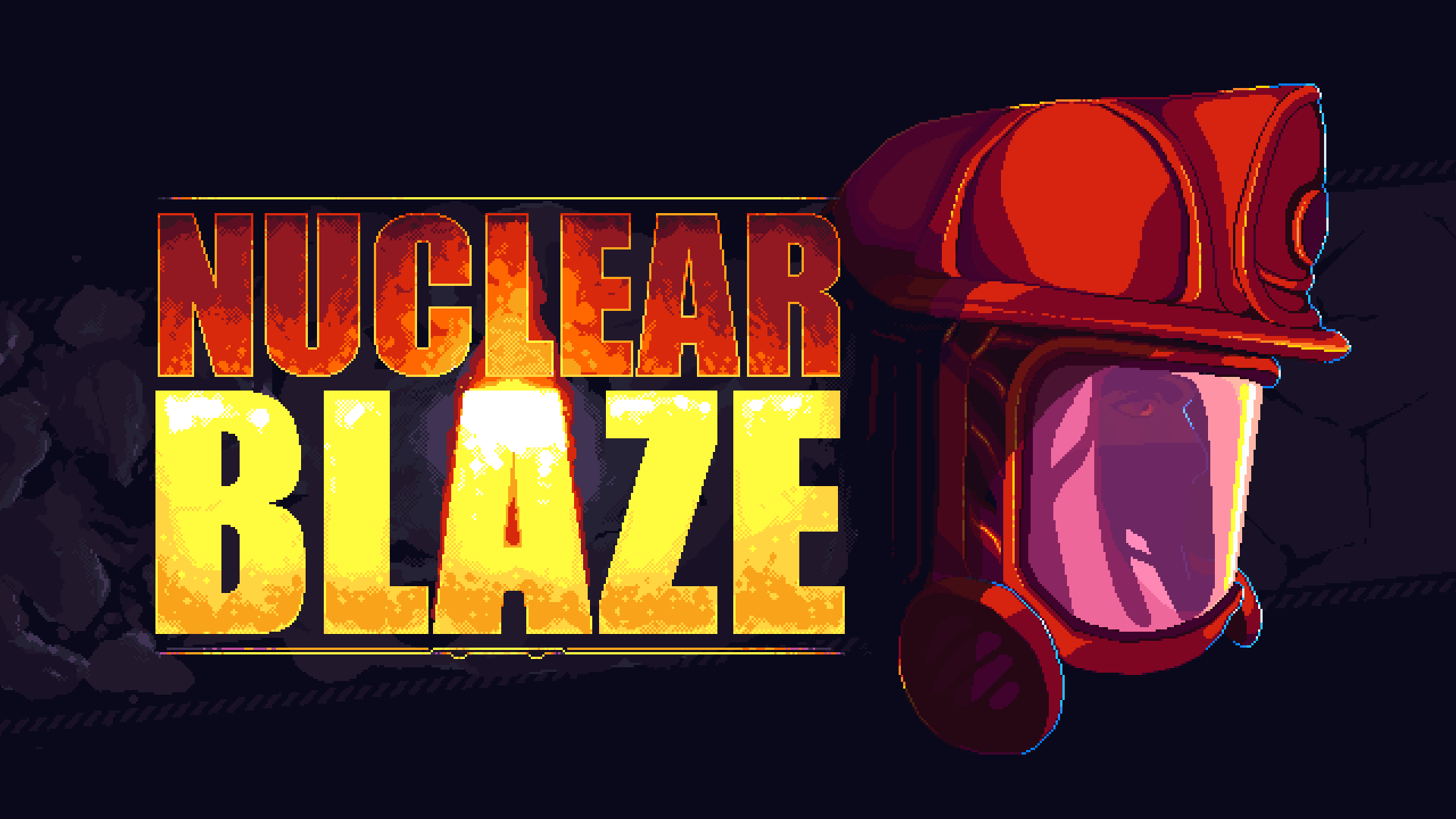 Hello friends. Today we get to review “Nuclear Blaze” a fiery action 2D-platform firefighting game from the creator of Dead Cells Sébastien Benard where you get to survive through devastating backdrafts, exploding walls, and a mysterious facility all while you try to keep the blaze under control. The game was originally created in 48 hours as a game jam entry for Ludum Dare 48, and the developer decided to flesh it out and publish it on Steam and ItchIO after his 3yrs old kid also loved firefighters’ stuff and ultimately led to the addition of a specifically designed “Kid Mode”!

You’re a firefighter, dropped from a helicopter to help your squad save a forest from a blazing fire. As you venture deeper into the forest, you will get to an industrial facility that is not mapped and everything is covered in camo netting. Things get stranger as you proceed deeper into the building – but I won’t spoil it for you.

You get to go around the platform levels spraying water to put out fires using the water in your equipped portable tank, – but be careful the water is not infinite, so you need to be efficient, or you will need to refill your tank to continue. Refilling your tank takes place near fire-cars, water tanks, or water-drops from Central. You will need to be fast putting out the fire as wasting precious time will result in the fire getting spread again from any active spots so make sure you put out all the fire in a level before it gets out of control. Adding to the sense of urgency is the fact that you need to be careful so you do not step on any fires as your armor only can take so much heat before giving up or spray water on any sparks so electricity shocks you – making you restart the level. So, to recap you get large fires that spread around again if you take your time to extinguish them while avoiding touching any and a non-infinite amount of water to do so. This must really feel like the closest thing to being a firefighter without being one!

As the fire is already ablaze, some parts of the level are damaged from it– we don’t want the bridge to fall while you’re on it! – most of this is scripted though and you cannot really get hit by it (only fire damages you) but adds nice variety, surprise, and immersion to the game as parts of the level get exploded or destroyed. Beware though there’s always the danger of getting fire damage from opening doors, so always have your hose ready!

During your ventures in the game’s levels, you will get to find many closed doors – which you need to find a button to press or access a control panel to open them and continue your journey. Also, you’re going to find many kittens that need rescuing even though most of the time you need to find your way around to them as the paths are mostly not clear. If you rescue a kitten, they will follow you around till you get them to safety which is a nice touch. Peppered through the levels are also plenty of secret rooms for you to find which adds more points to the exploration aspect of the game – make sure you look around for platforms that can lead you to them.

A few minutes after the game starts, you will get to acquire some upgrades like the ability to hose water upwards to reach platforms on fire above you or hosing down to create some sort of water umbrella to keep you safe from the explosions and fire. These upgrades will allow you to progress further into the game, but there’s not an option to avoid them if you want a more difficult experience as the levels are designed around those abilities.

Speaking of difficulty, the game includes a selection of different options that add (or reduce) difficulty if you find the default settings easy (or hard). Options include more armor levels that enable you to touch the fire more times before restarting, extra water in your tank that mitigates the need to refill as frequently, a more powerful water hose that increases water range and efficiency, a fire warning that helps awareness through visual and audio cues when stepping in fire and “Super fast fires” that increase fire spread speed – and as warned this option will make the game much harder if you want a larger challenge!

The developer was thoughtful enough to add a Kids mode too, providing a better and safer experience for younger players – where they get to play in specifically crafted levels, in which you can’t die, water spray is auto-aimed, and your goal is to save kittens! My kids sure enjoyed this mode having lots of fun saving kittens, and I did not worry they might get any disconcerting content! Very nice addition to the game to cater to the needs of both parents and their children and a personal thank you to Sébastien Benard for including this mode! I’d only wish more games followed this practice.

Graphics are based on detailed pixel-art as you can see from the screenshots – the levels, sprites, and fire are looking great. The optional scanlines add to the visuals giving a certain retro look, but you can always disable them if you prefer cleaner visuals. It really looks very nice, and it shows that the developer took the time to create a beautiful game based on a very popular style.

Music is based on a rock soundtrack that gets stuck in your head and is quite fitting to the “urgency” you feel while combating fire. Sound effects are also very well done – you get to hear the fire “crackle”, the radio static as you update Central on your progress, and the kittens meowing satisfyingly! Controls are smooth and simple, and you will get the hang of them in no time, and that really helps with all this firefighting whether you choose a controller, or a keyboard both works great for this game.

So, wrapping up, Nuclear Blaze is a good-looking 2D action platformer with an exciting story and gameplay that builds upon the feel of the urgency of firefighting creating a game that is entertaining for both adults and kids (with the included Kids mode). I heartfully recommend this game to all platform game fans as it adds cool concepts to the genre!

And remember! Stay away from the fire!

1 thought on “Nuclear Blaze – a review”