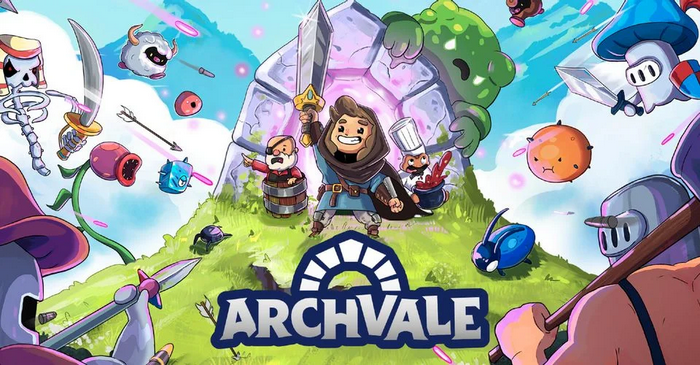 A malicious and cruel king once ruled the land and terrorized all who faced him. He along with the fabled arch to Archvale has become the fodder for ghost stories and passed down myths. All that remains of him are the Undying; beings whom the king cursed with immortality to live out their eternity in his prisons. You and you alone can defeat the Undying and rid the world from the dark shadow the king has left while getting to Archvale and eventually restoring peace and balance to the world.

Don’t get fooled by the cutesy graphics and the fun-looking enemies – they’re here to send you back to the “fountain” – essentially a checkpoint and a place you can fast-travel to – by shooting lots of bullets at you. Bullets you need to avoid either by moving out of their path or dodge successfully through them, so you better get your priorities and reflexes in check! And as you move around to avoid the incoming frenzy of bullets, you will also need to use your weapon to take down any and all the enemies and bosses! Things get crazy very fast and very often! Constant moving and dodging are essential if you want to live long enough to enjoy the compelling story and progress through the game’s world but the game features 3 different difficulty options to make this easier (or harder) for you.

As you move around the grid-like map, where essentially every “screen” is a room (Binding of Isaac style) you get to meet a large of variety to enemies and bosses out to kill you so at least you won’t get bored dying again and again from the same mob! And there’s a nice selection of biomes with different resources for you to gather in different environments and different sets of enemies. You always get the enemies to respawn when you use a fountain or die. Some other locations might include a chest with a powerful new item or a perk, or even the already mentioned fountain that you can replenish your health and health potions. Speaking of the map, you get to find special shrines during your ventures that teleport you to some little platform – where you’ll need to chase a blue diamond around while being shot at in bullet-hell fashion. These are often very challenging but will reward you with a new badge once completed.

Weapons that you can find or craft, are among three main categories: melee, ranged, and magic. My preference of weapon category is ranged so I always looked out for a powerful ranged one – it helps being away from the actual enemies so you can see the trajectory of their fire so you move out of their way accordingly – I don’t believe I would get very far if I had to be close to them with a melee weapon, but your playstyle might differ. There are many different weapons, and you can always craft and upgrade them in a town.

At your disposal there are also various wearable items to use in the 3 slots available: helmet, body, and rings that you will wear to increase your stats (along with badges and blessings) – a much-needed help in your ventures! Rings, you can only equip one, blessings are permanent buffs you usually find on new fountains and badges are stackable and usually alter game mechanics – the first one you acquire adds a small chance for enemies to drop health on death. You initially can use 2 badges, but you can add more slots as you progress.

Another set of items that will help is flasks! I specifically prefer to keep a lot of health potions in my bags, so you might need to brew some while in a town zone using the found plums to make them stronger – you will get to chug those very quick!

The progression is satisfying – the game does not use any skill tree or leveling systems – you only get to find, use, and upgrade wearable items and weapons to increase your chances of survival.

Graphics as can be seen on the screenshots include beautiful, bright, colorful cartoony pixel graphics, resembling early Legend of Zelda games. The top-down perspective adds a lot to its style and really helps the gameplay. There’s also a nice nostalgically cheery soundtrack and great sound effects to complement the game-style, if you forgive enemies belching out their attacks, like the first boss!

There have been reports for errors and crashes during the gameplay, but the developer has informed us that he’s already on top of them and fixes will be applied through updates shortly, which is quite welcome. Overall, the game is extremely polished, but a more convenient fast travel system would be very welcome as well as more side quests to keep the player occupied.

Archvale, while not a groundbreaking game in any way, offers plenty of challenge (arguably a bit too much at certain points) but if you’re looking for a nicely-rounded bullet-hell game mixed with RPG adventuring this is it! I did enjoy it very much, and I will recommend this to any players that like the relentlessness of the genre.