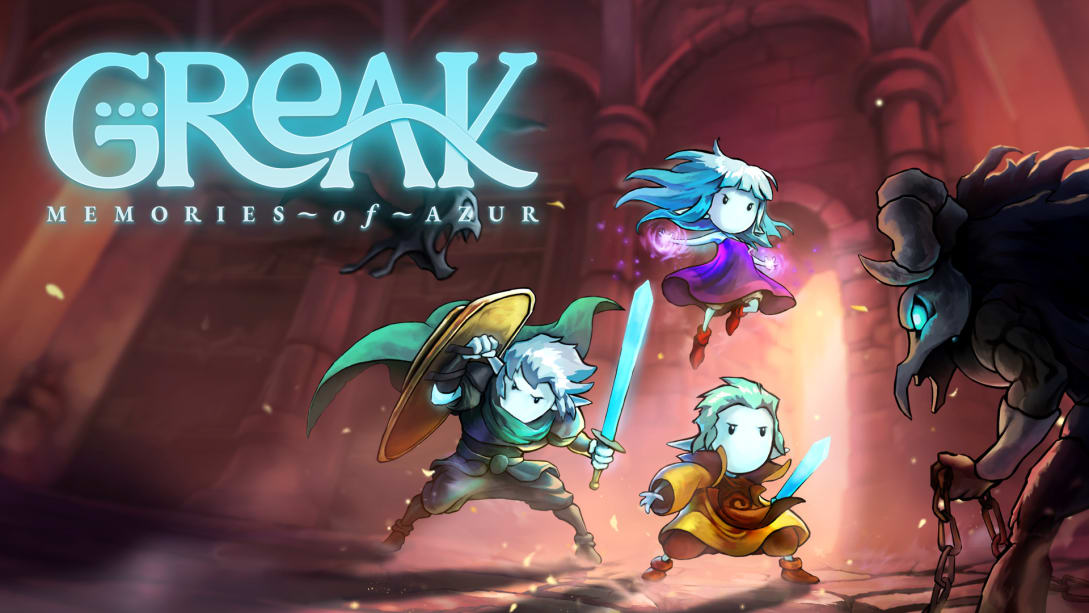 Hello friends. This is the review of Greak: Memories of Azur, a beautiful hand-drawn single-player side-scrolling 2D-platform adventure with puzzle elements from Navegante Entertainment an independent video game studio based in Mexico and published by Team17.

The story takes place in the mythical lands of Azur where human-like creatures named “Courines” live. Courines believed that they’ve put the danger of their hostile enemies “Urlags” behind them after defending the valley for years but when Urlags initiate a new attack using a mysterious force unleashing a devastating war on the land, Courines flee their lands with the help of airships.

You’re Greak, the youngest brother of Raydel and Adara, a member of the Courines. You and your siblings will help build an airship piece by piece to escape as well, avoiding the Urlag invasion, as the captivating story-line about family, home, and union in difficult times unfolds.

The unique gameplay idea is about the cooperation of the 3 siblings to overcome the various puzzles and enemies in your path. Throughout the game, you will find each sibling in different scenarios, and once you do, they will join the adventure and help you progress through the game. By alternating between the siblings and using their unique abilities you will get to solve specially crafted puzzles to find and collect the missing pieces of an airship in the world of Azur.

The main missions revolve around the repair of the airship. Every time you will get an assignment to bring back a specific item for the objective, and once you do return it you will get another mission to bring another item again regarding repairing that ship – something that will be repeated numerous times till the airship is completely repaired. Secondary quests include killing a specific number of enemies (which usually leads to a new attack being introduced) or gathering a specific amount of an item, a herb, or a mushroom. Speaking of items, you always need to have in mind the rather limited (even fully expanded) inventory space where you need to prioritize what items you’ll keep and what items you will leave behind.

Another aspect of the gameplay is the fast-paced combat versus a wide variety of greatly animated Urlag enemies. As the game’s protagonists have a different array of attacks between them, you often need to strategize on what is the most efficient way to tackle the enemies without dying and going back to the safe point. Confrontations are always intense and need plenty of well-timed attacks and dodges to prevail especially during the boss fights.

Overall, the gameplay is unique, and the puzzles need your attention to solve exercising each sibling’s unique abilities to overcome the given problem. Puzzles include holding a lever with one character while the other passes through the opened door, stepping on a button to do the same, or even pulling/pushing obstacles around to a certain position to pass or reach any blocked sections of the levels. Generally, the platforming is rather linear if not a bit repetitive, following the task of couriering items back to the camp.

As you can see from the screenshots, the hand-drawn visuals are the game’s main attraction – they’re jaw-dropping – but what you cannot see from the screenshots is beautiful as well – the animation! The animation is gorgeous, and something you need to see for yourself playing the game or watching a gameplay video – boasting full 60fps! Pleasant, easy on the eyes visuals include beautiful hand-drawn cinematic clips that will accompany key story moments as well as the nicely drawn backdrops for our heroes’ adventures. The first impressions show that the development team has exquisite taste and a great passion for designing the graphics of this game. On the auditory front, we get a fitting atmospheric live orchestra soundtrack (by the Philharmonic Orchestra, Cinco de Mayo from Puebla, Mexico) with sound effects to match what goes on on-screen immersing you into the game’s world.

Controlling Greak and its siblings is rather typical for a modern platformer when you control a single character. Double jumps to reach distant platforms and a dash to avoid incoming attacks are included, as well as Adara’s use of magic bolts to attack (instead of Greak’s close-combat sword), and instead of double jump you get to float for a few seconds at the time with her. Raydel on the other hand introduces a shield and a grappling hook to the mix!

But while controlling a character at the time is standard and rather simple, having all of them on-screen poses a more complex situation to control. Holding the left trigger button on the controller (a recommendation to do so while playing is displayed at the start) will keep all 2 or 3 characters under control which sound easy but since every character has a different “double jump” function, proves a lot more difficult in action and after a while, you get them misplaced – there are numerous times I had to switch to dedicating controls to a sibling just to get them bunched up again. This adds a lot of difficulty in controlling your characters during the aforementioned boss fights.

A welcome addition to the game would be a co-op of some kind (either couch or online) that would ease all the difficulties controlling the siblings around. It’s a rather odd omission since this game screams for a good co-op experience! Also, we would like this to be a longer experience with more diverse missions. Perhaps on its sequel (if they plan to release one), both additions would be available.

All in all, Greak: Memories of Azur is a beautiful, pleasant platforming experience. With some additions to ease the complexity of controlling the siblings simultaneously, and a co-op mode would result in a great game – but even with its current kinks the game is quite worth the investment and will be enjoyed by adults and kids!