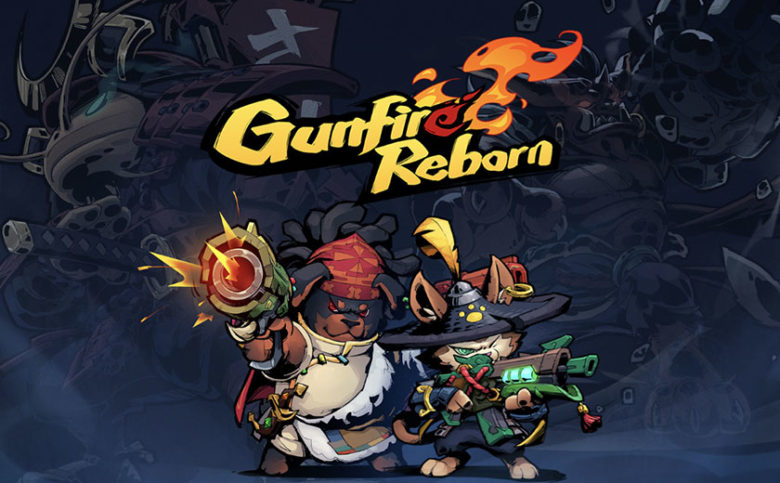 Hello friends. Today we’ll be reviewing “Gunfire Reborn” a procedural first-person rogue-lite shooter with fast-paced combat set in a uniquely styled eastern world. Developed and published by Duoyi Games in Hong Kong this new addition to the genre offers great gameplay, even greater gunplay, and a 4-player co-op mode! So let’s see what this game has in store for us.

You’re Crown Prince (at least at the start) on a journey to investigate some monster gathering that did not go well – after the misfortune of meeting a powerful enemy, you’re back at the inn where Uncle Bao has a few pieces of advice and an item to help with your stubbornness to return to the fight! So off you go again to the Longing Tomb to get another chance.

The gameplay loop is simple, as it puts you, the player in certain areas/rooms you need to clear, while you move from room to room until you reach the end of the “stage”. Clear all the “stages” and you get to move to the next “scene” and so forth. To transition between the stages, you will need to clear all enemies in the level, and then a portal will open for you to enter and reach the next stage.

Levels are randomly generated and all well designed with a unique “exotic” design that is consistent throughout the “scene”. Every stage features “wall cracks” or secrets that you need to have special talents to get to while there are breakable items such as urns peppered throughout the level that drop loot such as grenades and coins. During your ventures in the game’s levels, you will get to find chests (usually towards the end) that will offer you “goblets” which give you a choice between 3 skills to “Ascend”/upgrade toward the maximum level of “3” – level 3 ascensions have powerful additional effects and matching Ascension, Occult Scrolls and weapons will aid you to go further! For example, you can upgrade your smoke grenades, and the enemies affected by them (shown with a mark above their heads) will get a debuff for a short time which adds to the overall damage your hero can do. To add to that there are even shrines where you “pray” for power, wealth, etc. to convert HP to scrolls or coins if you’d like that.

In the meantime, killing enemies will grant you awesome loot in the form of weapons, scrolls, coins, etc. Weapons are the main protagonists of the game and while satisfying to loot, they’re even more importantly very satisfying to shoot with as gunplay is very much spot on! Each weapon and weapon type has its own unique style, randomized stats in the form of inscriptions and they all feel great to use. Weapon variety is huge and each weapon can use one of the three available ammo types – so choose wisely which weapon you’re gonna keep as you may gimp yourself if all have the same ammo type and you run out of it! There are pistols, SMGs, assault rifles, snipers, grenade launchers, lasers coming out of your hands, even dragons (yeah you read that correctly), and many more to choose from depending on your play style and favorite type. You can hold up to 3 weapons including your trusted initial weapon that does not consume ammo.

Scrolls are passive effects added to your character in various rarities in true WoW style! Examples of scrolls increase elemental damage, doubling ammo capacity, etc. There are more than 100 scrolls and multiple ascensions that will change your playstyle but be careful as most of them add a debuff to you too.

Inside the levels, you will meet “Peddler” where you can use your coins to “buy” items such as Magic Buns (to recover 30% of your health), Ammo, Grenades, and Weapons if you’re rich enough. You can also meet a “Craftsman” that will enhance your weapons or reforge said weapons’ inscriptions which is welcome if you got a weapon you liked and you need a better inscription on it. Depending on the original weapon level, the price to enhance may vary from a few coins to a hefty amount. At the final stage you will get both the Peddler and the Craftsman to assist you before venturing to the final fight with that scene’s boss, so no need to go back to the level that you met those – how very helpful!

Enemies now, are varied and unique, drawing inspiration from eastern anime and culture which makes sense as the Developer is based in Hong Kong. At the end of each “Scene” you will get to confront a really unique and well-designed challenging boss that will take a good effort to beat, so make sure you upgrade your character in a thoughtful way to make it easier!

When you die or you complete a run you get to increase your talents so you’ll be stronger next time by using “Soul Essences” you gather from killing enemies. Adding Soul Essences to a talent essentially levels up the entire tree. Trees are distinct, and offer talents for “Expedition”, “Battle”, “Skill”, “Survival”, “Weapon” that are shared between all unlocked heroes and “Hero” which are talents for a specific one. Adding points increases stats and ultimately helps you through the game immensely.

There are 6 heroes to choose from, all with their own abilities and all animal-like so this is a nice touch! All heroes except the first are locked behind various progression points, so it will take some time and many runs to unlock all of them but its really something you’d be more than happy to do as all heroes feel different as they get different starting abilities, etc., for example, the hero you start with can “freeze” enemies in place, while the second can dual-wield weapons.

All that “randomness” in weapons, goblets (there are over 100 different items and various weapons), enemies, and levels ensures that every run will be completely different from its previous, adding heaps of replayability to the title while maintaining a constant surprise factor in every turn!

The graphics are very nice and cutesy (especially the heroes) and remind me of Borderlands in a low-poly-cell-shaded version if I can say that. Animation and player movement is very nice and you really feel accomplishment after a particularly difficult room clearance! Music and Sound are pretty standard and they blur into the background while you fight the enemies. Control-wise we played the game using a keyboard/mouse combination and we think that’s the best way to experience it as there’s “partial controller support” for controller fans that we do not think will do the game any justice. Controls are fairly simple but very responsive and consist of typical keybinds that you can remap:

Overall Gunfire Reborn is a solid game – gameplay is very tight and as said already gunplay in this game is very satisfying. In this type of game, the overall feeling is essential, and Gunfire Reborn nails this! We strongly recommend this to any FPS fans that’d like to check the rogue-lite aspects of the genre.