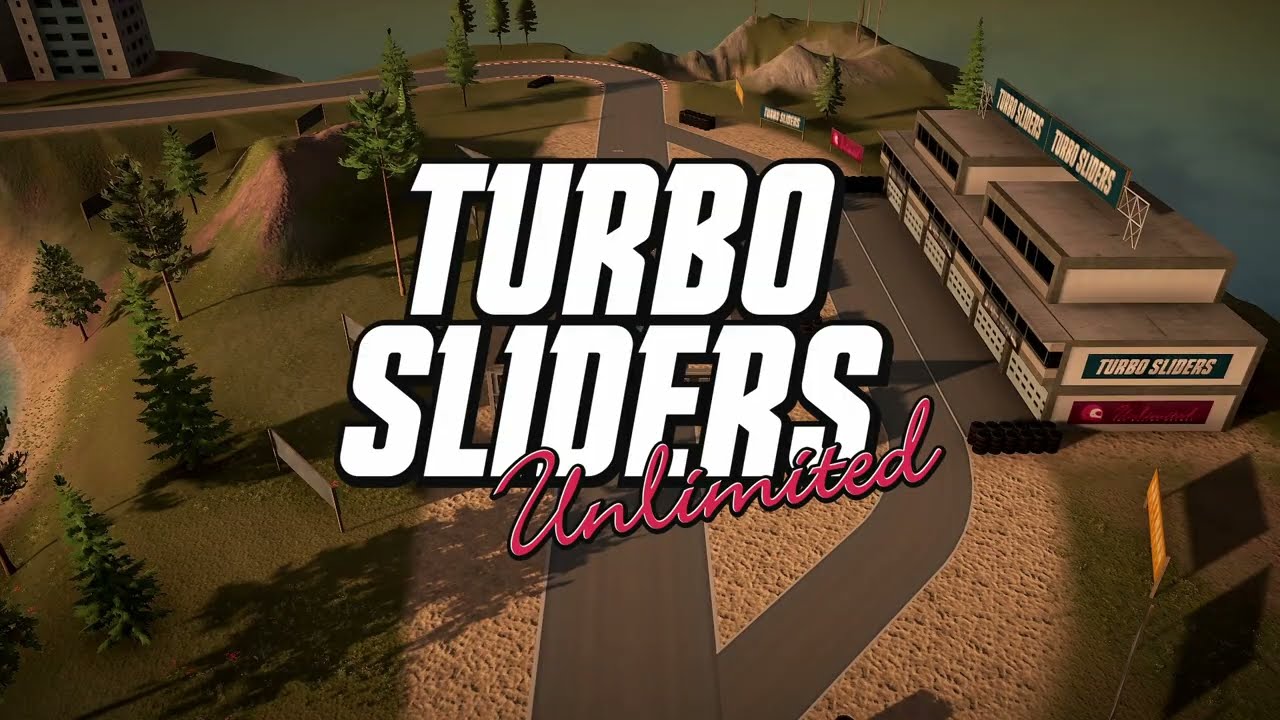 Hello friends. This is the review of Turbo Sliders Unlimited, a highly customizable car racer currently in Early Access! TSU was inspired and influenced by old-school multiplayer racing games such as Pitstop II and Super Offroad (which I was particularly hooked into as a kid) but adding modern online features, unlimited customization, and expansion options! TSU developer Antti Mannisto is an industry veteran coming from Finland with 20 years of experience from Ubisoft, RedLynx, Remedy Entertainment (where he designed and implemented Alan Wake’s AI) and involved in numerous indie projects. He is actively working on this passion project since 2003 in various forms – more on that here.

The title’s main features include multiplayer in two forms:

On top of the real-time competitive modes, there are local and global leaderboards (for each level and vehicle) which you can compete for the fastest hot laps alone or versus leaderboard ghosts. To round things up, there’s also options to tweak to adjust racing as serious or as arcade-y you prefer allowing for a broad spectrum of players to customise the experience to their liking. Added to the mix are feature-rich level and vehicle editors as well as different game modes supported like parkour, platforming (!!!) and sumo (where you get to push each other away from a shrinking platform!) with more planned.

From all the above we can understand that online multi-player, user created content (users can share all their creations via Steam Workshop or automatic downloading in multiplayer games) and moddability is the focus of this game.

There’s 3 different cars to choose from right out of the box, that offer different levels of grip and speed with again options to create your own using the included models. The physics are nice and offer good gameplay on-road and off-road something essential for good racing games – this is especially important in the case of TSU allowing for user created tracks and content to be enjoyable even in the craziest of creations.

Menus on the other hand are rough around the edges mainly due to the extensive number of options to tweak the game allows – had to use a combination of both mouse and controller as we could not change some options with a controller only – but options truly offer unlimited customization, giving you the tools to create some wacky tracks (even underwater!). There are also plenty of camera presets (including 3rd person close/far, 1st person, top-down, fixed position, and a free camera) while again, the developer added extensive options to tune cameras to our liking offering great adaptability on how you can enjoy this game.

Joining multiplayer games is a breeze, but as the games are usually hosted by other players (unless dedicated servers are online) you will find cases where your ping can be way higher than the host – resulting in un-favorable situations as the host usually has the advantage of lower latency.

We had plenty of fun in couch split screen with my kids though, and this is the mode we mainly play this game. Looking back at recorded games and reliving any crazy happenings in the game’s various modes is also very entertaining!

Graphics-wise the colors are a bit too “dim” on the world but terrain, folliage and trees are beautiful to look at. The game engine (Unity) offers high frame rates which always add to the smooth racing experience. The colors and textures on the cars are very good looking – there’s plenty of car skin packs you can buy to increase the available options (each customization pack gives you access to at least 20 new paint textures of varying styles, 4 new colors, and 1 new paint command to be used in any paint job you create, also increasing the maximum metallicness and smoothness) on top of the default options.

For the controls, you can certainly use a keyboard to drive the car, but using a controller is where the driving feels better with tackling the different tracks. That though is not the case for the entire game as the menu options need a keyboard/mouse combination to fully utilize.

One of the things that need some polish is the menus. Simpler menus for customization should be implemented to make this more user-friendly and accessible – the depth in available options is definitely there but at least in our case the interface was overwhelming to explore and enjoy – constantly questioning what option does what in-game. On the other hand, having that much depth in customization without extensive and complex menus is something very difficult to achieve so the developer needs to somewhat balance between usability and available options.

Another feature that would be welcome to the game is matchmaking with centralized server hosts that will even out the latency between the players but understandably this will not offer so much variety in game modes as user-hosted games – perhaps both options can be available so every player can have the ability to choose. Recent patches though introduced dedicated servers, so players can have those hosted somewhere for people to race onto rather than their own PCs and internet connections.

The game is already fully playable with most main features implemented, plenty of new features lined up (such as special game modes, single player campaign, etc.) while old ones getting some polish so there’s plenty to look forward to even if you have exhausted (highly unlikely) all the currently available options.

We totally recommend this game to creative racing fans that will sink their teeth into its customization options, resulting in truly unique tracks and modes that surely will keep them entertained and occupied for long! Let’s race!